Exactly a week to the day the Phase 2 project for the Murray Lions Club Community Skate Park was completed, community and business leaders came to the park Tuesday to see the work up close and help the Murray Lions celebrate the completion of their Centennial project.  Murray Lions President, Paul McCreary said “Lions Clubs International celebrates their 100th anniversary this year and each of the 46,000 Lions Clubs worldwide were challenged to complete a community project to celebrate this milestone.” The Murray Lions Club Foundation provided the financial muscle to push the Skate Park to the next level. Phase 2 marks the second in what is planned to be a three-part project to place ramps and equipment in the park, each one coming with a price tag of about $25,000. “The project could not have been completed without the community’s financial support and our Corporate sponsors from this past year; The Murray Bank, Thornton Heating and Air, Forever Green Lawn Care, Walmart of Murray and Chip Wynn Motors,” added McCreary.

However, it was who was not present for the ribbon cutting led by the Murray-Calloway County Chamber of Commerce that may be at the center of the story. There were no skateboard enthusiasts at the Tuesday morning ceremony, but they came later in the day in droves.  “You come out here in the afternoons, and you’re routinely seeing 30 or 50 skaters out here,” said Matt Falwell, a founder of the Murray-Calloway County Skate Park Board as well as the person who helped to lead the construction of the new ramp last week along with Lions past president, Doug Crafton.

That collaboration theme was prevalent at Tuesday’s ceremony, with Calloway County Judge-Executive Larry Elkins and Murray Mayor Jack Rose emphasizing it during their presentations. “When people work together, things get done,” Elkins said. “There is not enough tax money available these days to do what we want to do or, really, what we need to do, and it’s these public/private partnerships that make something like this a reality.” “These partnerships demonstrate the type of community we have,” Rose added. “I think that’s part of our culture here, too, and how we take care of the people here.”

All photos courtesy of Terry Little 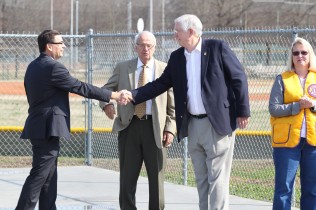 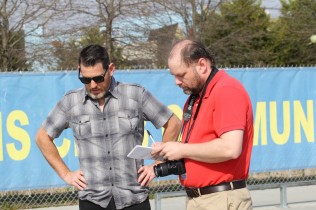